furthering the art of dance film

Posted on June 24, 2000 by dancefilmsassociation 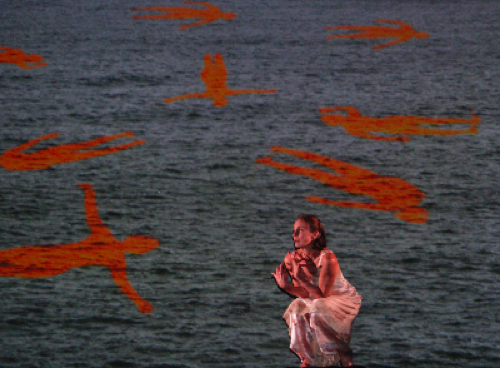 A dappled chameleon lingers among granite boulders. A water lily’s pale face brightens a stream of dark water secreted within a hidden cleft. A ripple of fabric seems to unfurl and crash against the face of a rock wall above white surf.  Glimpses of color, of light; all of these moments are revealed to be a dancer’s body flashing impermanently within a natural world that can, and will, endure with or without her.

Boston intermedia artist Dawn Kramer and her partner Stephen Buck created a video-amplified installation for two evenings at the Massachusetts College of Art and Design in early June. Kramer is a professor in the Studio for Interrelated Media at MassArt, and since the 1980s has been part of a team that periodically has taught “Performance in Videospace.” In a program that designated half of its proceeds for Japanese disaster relief, Body of Water dealt less with the tsunami, flooding and climate change of recent years than with the ways humans take the availability and purity of water for granted at our own eventual peril.

In the darkened Godine Family gallery, Buck’s videos, executed with Mark Coniglio’s Isadora software, established the mood of nature’s eternal cycles with a full, coral-tinged “Moon” rising and setting unhurriedly through a sky far from the lights of habitation. Next, a tree at the Haystack Mountain School of Crafts on Deer Isle, Maine fractured and churned kaleidoscopically, as glimpses of the dancer’s arms and fingers joined the tree’s branches in the webbing of a natural mandala.

Eventually Kramer welcomed her guests into the main auditorium where small-scale “video haiku” played on each of four walls like independent, cardinal references. Empty glass bottles – just waiting for messages! – bobbed from her earrings; her remarkable, just-this-side-of-glamour fishscale dress, executed by Sara Marhamo of the Industrial Stitchers Guild, was composed of crushed plastic bottles.

We were invited to pull slips of paper from a jar. Inside were a series of water-themed haiku that could certainly do double duty as psychologically insightful fortunes. I got:  “Dew evaporates/And all our world is dew/So dear, so fresh, so fleeting (Issa).”

Created on the Maine coast, in the grove of a Massachusetts yoga center called Westwoods, on the wind-scoured cliffs of Nervi, Italy (where Kramer and Buck spent time developing material at the nearby Bogliasco Foundation) and in three exquisite temple gardens in Kyoto, Kramer and Buck’s quiet, single-channel videos recalled Anna Halprin’s aesthetic terrain. These were primarily images made in solitude, recorded by an “invisible” observer for an audience that might be physically remote or emotionally estranged from the natural setting, and touched but never completely distorted by an edge of surrealism. Kramer has said she was interested in playing with scale in these vignettes, but that wasn’t conveyed by the Mass Art installation. Instead, one had a keener sense of the camera’s closeness or distance from the dancer’s body than of the vastness or detail of the natural setting.

Kramer then took to the room’s proscenium for a brief solo performance. Sometimes humorous, sometimes merely elaborately colored by the moving projections, she turned upside down like a starfish, bobbed along as if pummeled by brilliant moving droplets from a spewing fountain, and was dissolved in the streams pouring ceaselessly from a row of identical faucets. Kramer’s dancing has always been an idiosyncratic mix of fussy gesture and linear alignment – she often seems to be thwarted, grasping at something just beyond her reach. Here, the expansiveness of the environment made by the video imagery – different forms of water, closely observed rocks, and finally, the vision of a parched desert — reinforced the sense of her presence in a natural world that could absorb and vanquish her.