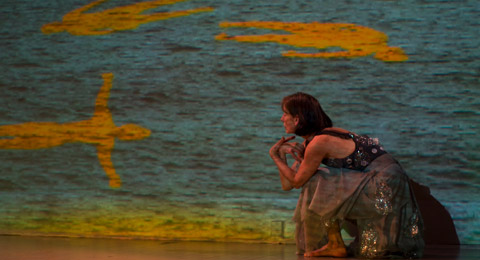 Dawn Kramer's dance-and-video concert, "Body of Water," last weekend at Mass College of Art, ended with haiku projected on the walls of the performance space. It was almost too much. The evening had been one long haiku, if you don't take the definition of that traditional Japanese poetry form too literally. All eight videos and Kramer's video-dance shared the qualities of brevity, surprise, and a carefully crafted appreciation of nature.

Before the live performance, the audience looked at the video installations, two by Stephen Buck and six by Kramer, screened in large spaces at the college's Pozen Center and Godine Gallery. All the video material captured particular subjects with stationary cameras and sparse, imperceptible editing. In each of them, as you looked at one scene for a while, it would change slightly but significantly.

Buck's "Moon" took the most expansive view — a black universe with stars creeping in their orbits. From one corner a large glowing globe rises, arcs across the firmament, and sinks away — the moon, its shadowy hills and craters flickering in sync with the rhythms of a Spanish guitar. "Tree" looks up into a tangle of leafless branches and human arms, filmed kaleidoscopically to create a collapsing and expanding abstract design.

Kramer's videos were shot in mossy Japanese temple gardens, on Maine cliffs, and in a couple of other landscapes of rocks and water. In each one, we gaze like tourists at a beautiful scene, but then we notice a shadow moving under the trees or a shape that's too smooth, too angular. We keep looking. The shape, the shadow, turns out to be a woman's hand, a reflection of her head, her back inching along the ground, her immobile face inside the aperture of a stone lantern. Other things subtly change. Drops of water make spreading circles on a mirrorlike pool. The sprinkles increase to a rain shower. The surface of the pool turns into foam. Afternoon shadows move onto the cliffs and the breaking waves grow calm. A figure clings to the rocks, vanishes, emerges in another place. If you took a snapshot of any of these vistas, you'd miss these discoveries.

Kramer's 20-minute performance piece continued the idea of gradual revelation. With Buck's expert visual collaboration (unobtrusive sound design was by Antony Flackett and costumes by Sara Marhamo), Kramer created a succession of uncanny images in which you often couldn't distinguish her from the natural setting. She merged with projected ocean spray and waves. She seemed to be perched in the weblike branches of Buck's kaleidoscopic tree. The surging ocean claimed her barely perceptible body.

Steady streams of water poured from eight old-fashioned water faucets. Kramer, or a film of Kramer, loomed above them like an Egyptian deity. She sank down and seemed to be under water, breathing bubbles. The bubbles became a splashing fountain. Kramer appeared as a sea goddess, dancing in a glittering dress. Orange shapes — goldfish, bodies — seemed to be chasing her, and she floated away with them.

Finally, she brought out a chair. Real all of a sudden, but not quite, she donned sunglasses, drank from several plastic water bottles and tossed them away, and unfolded a newspaper. As she turned the pages, words popped out and bounced away across watery scenes of rivers and streams. The words were water words, and they became more ominous — LAKE, RIVER, ARROYO, FLOOD, TSUNAMI, DESERT. The scenes were of drowned deltas and sand dunes. Finally there was no water, only desert. The woman slumped in her chair, and the stage lights went out, leaving us with projected watery haiku for consolation.